Cement your place in history!

Proceeds from the Brick Paver Program are used to upkeep Midlothian’s historic Larkin Newton Cabin, which was restored and located in 1991 to downtown Heritage Park, 234 N. 8th Street, Midlothian, TX.

You can help preserve a piece of Midlothian history and at the same time honor a loved one, organization, or commemorate an occasion by supporting Midlothian’s Brick Paver Program.

Since 2011, the Midlothian Area Historical Society has ensured that the cabin receives ongoing repairs and restoration by raising funds to support these efforts with the Brick Paver Program. The purchase of each personalized brick purchased for the path around the log cabin contributes to cabin upkeep and repair.

On an as-needed basis a master craftsman performs repairs to the cabin and tends to it by re-chinking the logs, which is a way to fill in the extra space between logs left intentionally to allow the wood to breathe. The space created by the gap in the logs is called the chink, and it lets in drafty air and small pests that can damage the structure. Occasionally, the cabin’s roof and floor also need repair.

Brick Paver Personalization:  Bricks may be personalized with up to 36 characters, including spaces  (12 characters per line, on three lines).

To order a brick, complete a brick order form online. 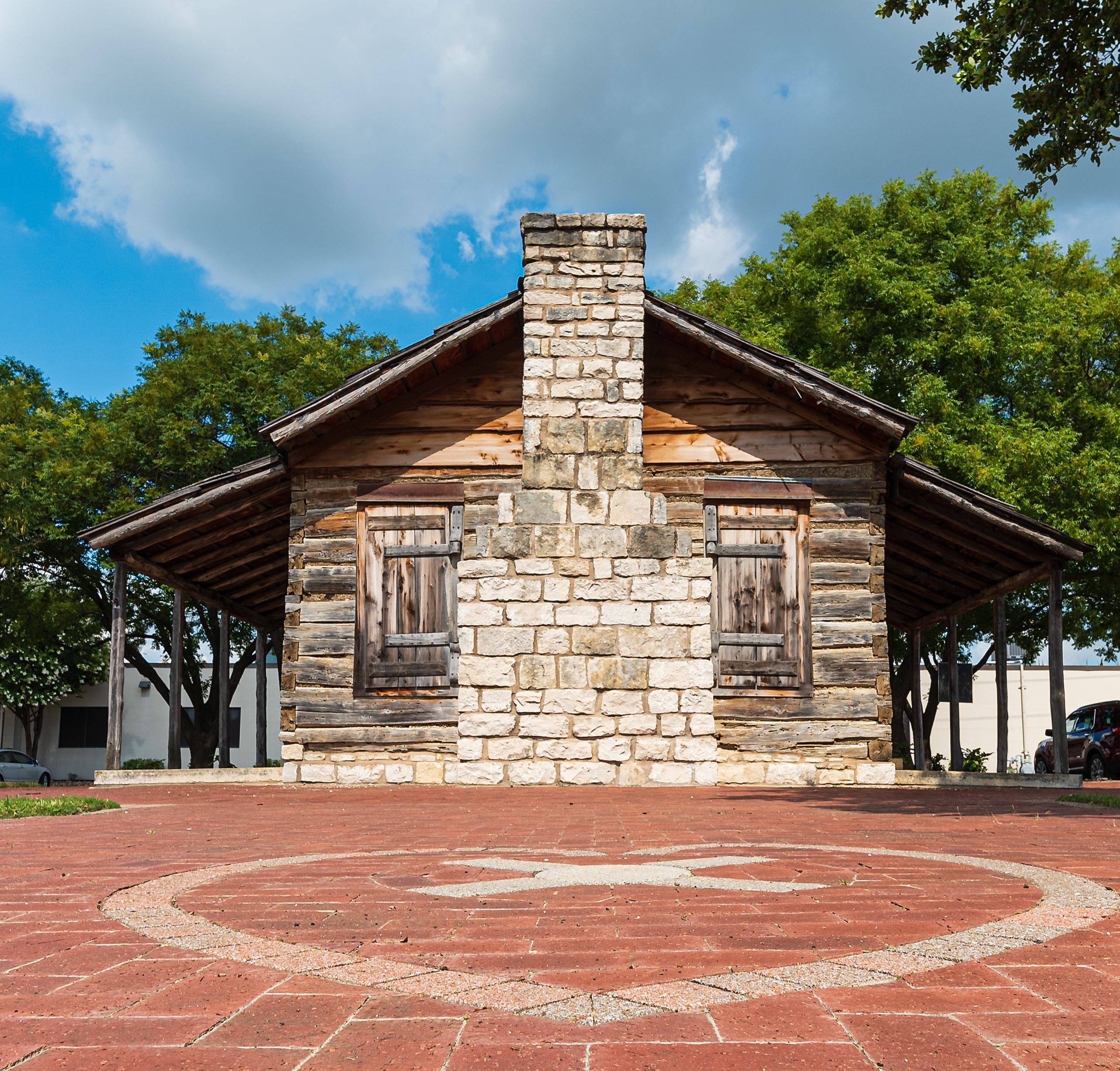 Example personalization: 12 characters per line (including spaces between words), up to three lines.

The Story of the Larkin Newton Cabin

How Larkin Newton Cabin Came to Be

Larkin Newton was an early settler to Ellis County, Texas. He was born on March 17, 1794, probably in Newberry County, South Carolina.  A full recounting of his story was compiled by Randell Tarin in 1995. 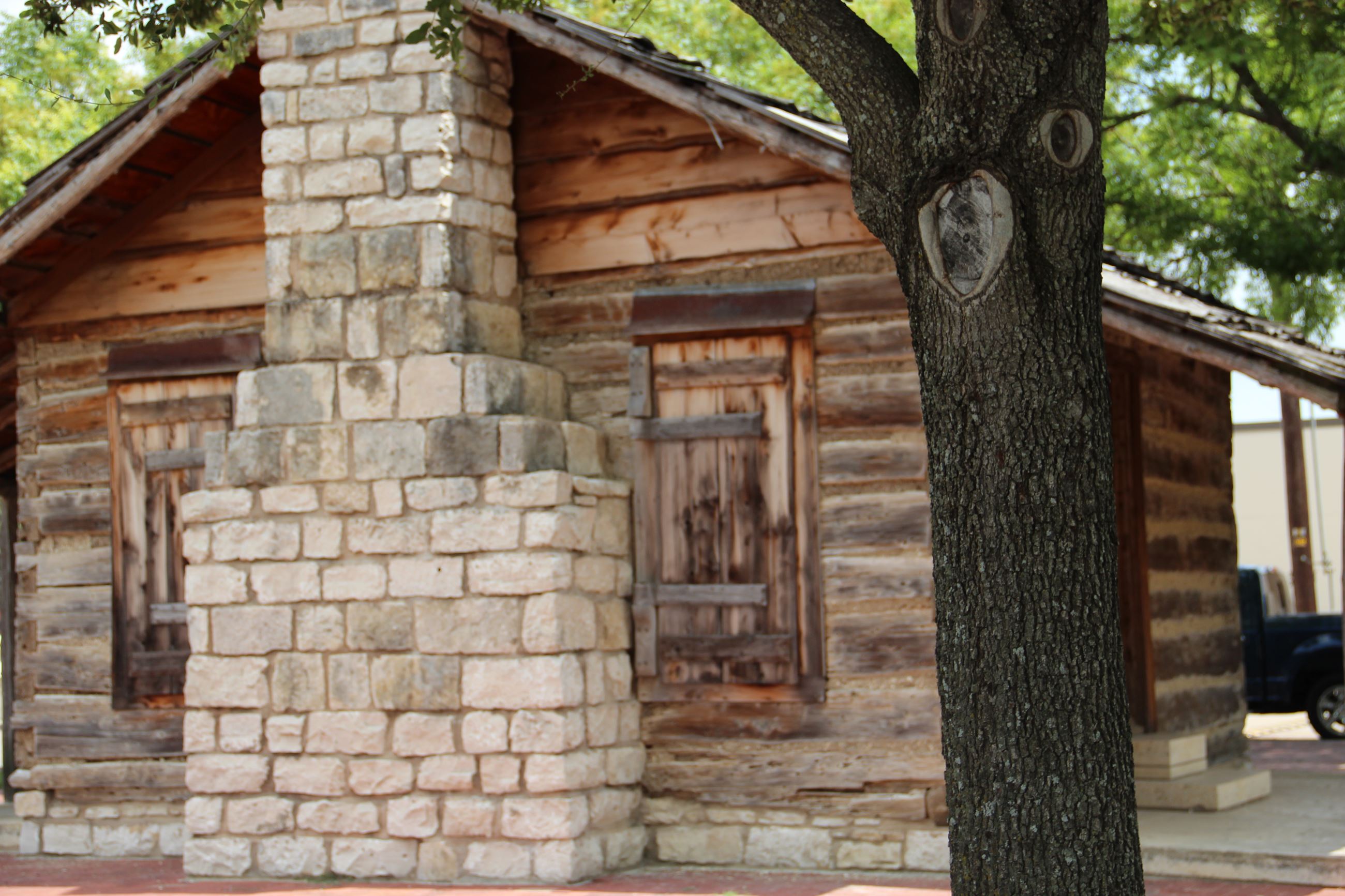 An edited account is published here with his permission.

The Newton family migrated to Tennessee, Missouri, and Arkansas, playing key roles in setting up and governing new areas.  Larkin Newton married Mary Ann Wilson in 1829. Despite his prosperity, new lands beckoned him and others south. When Texas was still a republic, two large grants of land were made from the old Robertson’s Colony empresario grant. They covered millions of acres in what is now called Northeast Texas; they were the Peters and Mercer Colonies.

After Texas became a state in 1846, these grants were continued in force, although many disputes arose over them in subsequent years. This land was advertised widely in the North and East, and drew        settlers from many distant places. To hold their land, a proviso under the Peters Colony contract required settlers to build and occupy a house before July 1, 1848.

Larkin Newton’s family arrived in Texas by early spring of 1848. Larkin Newton, took up his 640-acre tract of land southwest of present-day Midlothian. Because trees they found were of insufficient number and of such poor quality to provide them with suitable building materials, they were compelled to look elsewhere. To the North, in nearby Dallas County, lay a dense cedar forest, the closest source for suitable lumber. The evergreens were subsequently felled in great numbers to provide the needed timber required by the numerous settlements.

The simple one-room cabin that they built has stood the test of time surviving the nearly 150 years since its creation. This is evidence of the pioneering skills Larkin and his brothers learned from their father and Larkin passed on to his sons. The cabin was situated on a hill near a spring just south of present-day Midlothian. The creek that lay east of the cabin still bears the name Newton Branch.

The Newton Cabin is built from hand hewn red cedar logs about 5 inches thick. It’s purportedly one of the few remaining Peters Colony structures in North Texas. The historical record shows that the cabins of this area were completed by the Peters Colony deadline of July 1, 1848.

Some people are surprised when they see the Larkin Newton cabin for the first time because it little resembles the preconceived “Lincoln Log” image that they have. What’s unique about this one-room, single-pen structure is its corner notching. In cabin building, notching is everything because the entire weight of the building rests on the four corners and therefore on the notches. Not only are the notches weight bearing, but they also prevent horizontal slippage, thereby holding the walls in place. If the notching is weak, then the entire structure is weak.

The Significance of the Half Dovetail Notch

The Newton cabin features the half dovetail notch that accounts for about thirty-five percent of all log dwellings in Texas. This type of notch is found most frequently in Central and North Texas. The half dovetail notch reportedly evolved in Central Europe and was exported to America by early immigrants. It was used broadly in Virginia and throughout the Upper South, Ohio Valley, and North Carolina Piedmont.

The half dovetail is so called because it has a dove tailed slant only on the top side of the tongue of the log. The result is a superior notch, difficult to make but producing a firmly locked joint that has the added advantage of draining rain water to the exterior of the notch. Half dovetailing is generally an indicator of fine craftsmanship occurring usually on logs that are neatly hewn on two sides, as is the case of the Newton cabin.

It’s very likely that Larkin Newton used this type of construction on earlier homes in Tennessee, Arkansas, and Missouri. Evidence for this is seen in the cabins built by those who lived near him in those places.

Though there may have been no direct contact between these individuals, certainly the evidence suggests a very strong regional influence. From this we may draw a reasonable conclusion that many of the early cabins in the Midlothian area were of similar construction due to the influence of Larkin Newton, Benjamin G. Garvin, William Hawkins, and others. 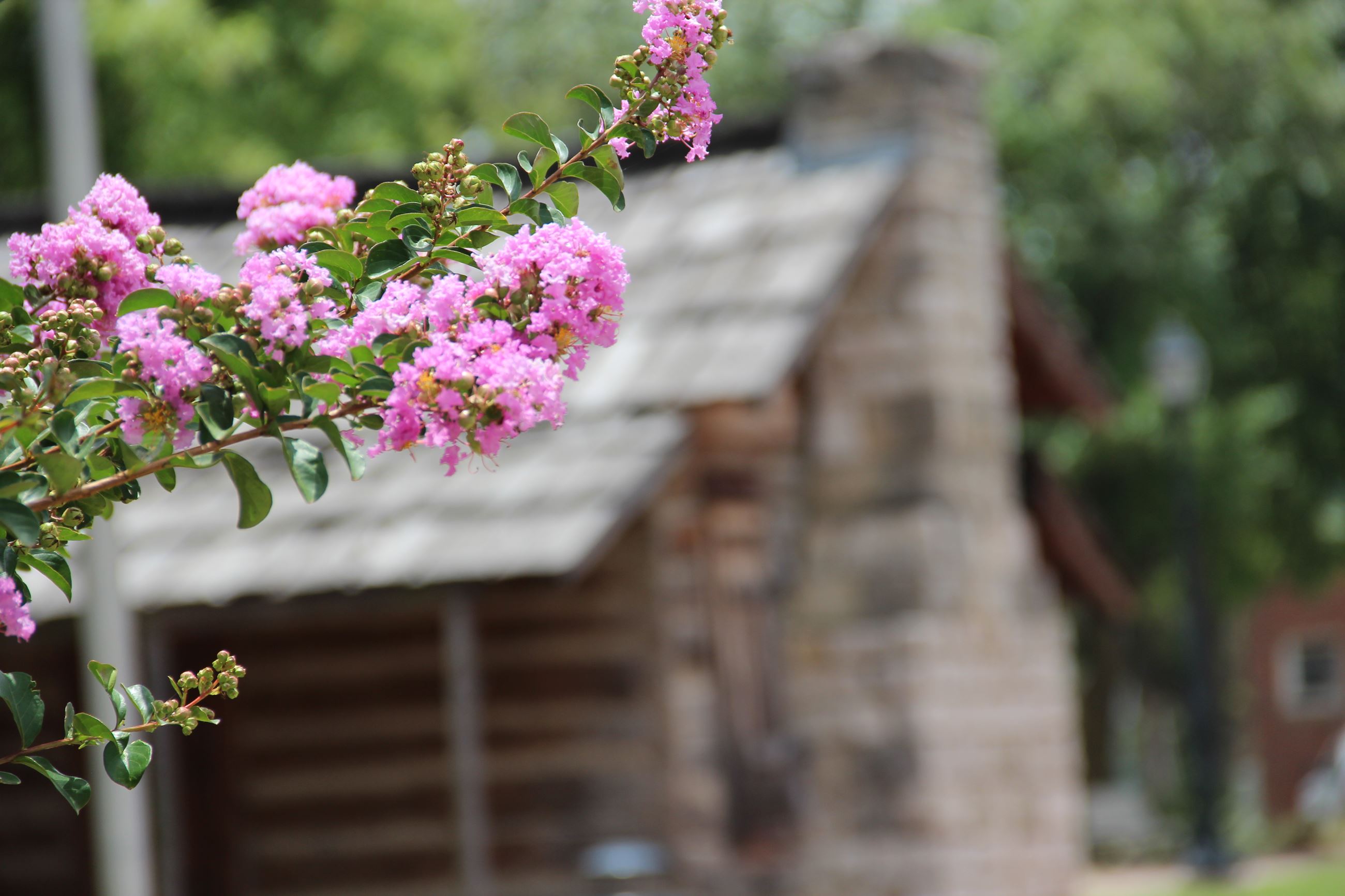 About 1880, a second structure, a school house, was moved to the cabin site and attached to enlarge the home to three rooms. Both buildings were covered with clapboard, which archeologists have stated greatly aided in the preservation of the structure.

After the death of Larkin Newton and his wife, the cabin and surrounding property, including the Newton Family Cemetery, belonged to their son Thomas Newton and his family. It was later sold by the Newton family to John Belew who in turn sold it to Jim Darby.

The cabin was ultimately abandoned and used as a hay barn for many years.  Finally, in the late 1960s it was purchased by the late Jack Anderson and his wife Brooks. The Andersons had the cabin carefully dismantled and relocated to their farm two miles north of Midlothian. It was fully restored and furnished by Mrs. Anderson with period pieces.

After Mr. Anderson’s death, the Anderson property and the cabin were purchased by Gifford Hill Portland Cement Company. In a generous gesture, the Gifford Foundation offered the cabin and furnishings to the Ellis County Museum, Inc., of Waxahachie. The museum accepted the furniture, but the gift of the cabin was declined due to financial limitations and other practical considerations.

In the Spring of 1991, efforts began to obtain the cabin for the community. Negotiations were successful and from this was formed the Midlothian Restoration Committee. This committee was tasked by  then Mayor Maurice Osborn and the City Council to relocate the cabin and to find a use for the old abandoned fire hall.

In January of 1992, the cabin was moved to the downtown Midlothian area where it has been restored to be the centerpiece of downtown’s Heritage Park and historical district.

The Larkin Newton Log Cabin is more than just a source of deep pride for the City of Midlothian, Texas and for Ellis County, it's a reminder of our treasured past and a symbol of the pioneering spirit that forged both our community and great State from the wilderness.