"Officer down, Officer needs help" are words that can change lives forever...words that remain ever present and irremovable in the minds and hearts of the police family.  Each year we conduct a memorial service to honor those who have made the ultimate sacrifice. This ceremony is conducted in conjunction with the National Police Memorial ceremony in Washington, D.C. in the month of May. 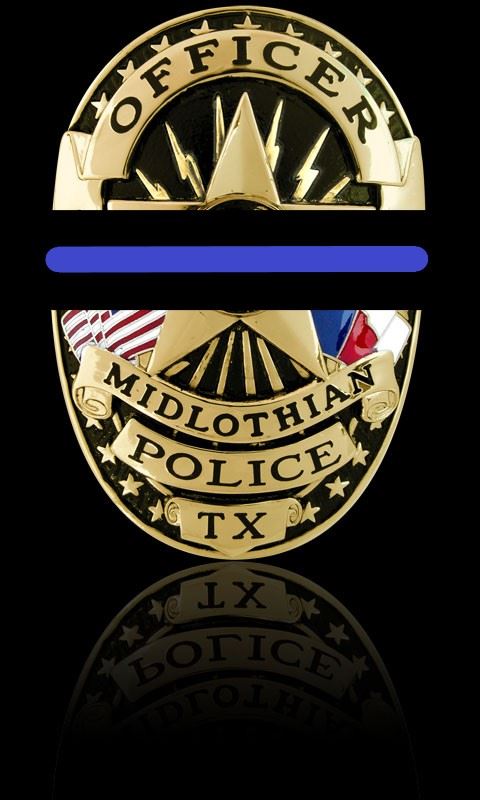 Fallen in the Line of Duty

On May 1, 1916 Marshal Blair was on duty serving the Town of Midlothian. His body was found in the hallway of a public building where it appeared he had suffered a gunshot wound to the head. A subsequent investigation and coroner’s inquest determined that he was the victim of an accidental shooting.

Officer George Raffield was new to the Midlothian Police Department, having previously served in various capacities with  the Wilmer and Red Oak Police Departments. Because he was new to the town and because of his youthful appearance, he was placed in an undercover assignment at Midlothian High School. As part of this assignment, he befriended a student that was a suspect in his investigation. He rode with the suspect and another student to a secluded area off of FM 875, south of Midlothian. Officer Raffield was unaware that the two students had discovered he was an undercover police officer. Once at that remote location, one of the boys shot and killed Officer Raffield. His body was found the following day.

Officer Raffield had served with the Midlothian Police Department for one year. He was survived by his parents and sister.

On April 17, 2014, Officer Heather Phares was driving home after working a special assignment for the Midlothian Police Department in conjunction with the Midlothian School District.  She was involved in a traffic collision with a tractor-trailer, resulting in traumatic injuries.  She passed away as a result of her injuries four days later.

Officer Phares served the citizens of Midlothian for almost two years. She is survived by her parents, brother, and sister.