Midlothian Fire Department’s 1918 Ford Model TT was originally delivered to the U. S. Army Quartermaster Corp. This vehicle was the first mechanized fire apparatus owned by the W.W. Major Fire Company in Midlothian, Texas. W.W. Major was a local philanthropist who built much of the downtown area of what is present day Midlothian. The Model TT fire truck was one of many originally used on Army installations during and after World War I. It was purchased by the City of Midlothian as a surplus vehicle from the military in the fall of 1918. It was used by the W.W. Major Fire Company from 1918 to 1946. It was first restored by fire department members in the early 1960’s and professionally restored by the Texas Fire Museum in Dallas, TX beginning in 2008 and completed in 2010. It is proudly displayed at the Midlothian Fire Department Administration Building, which was constructed in 1912, and originally housed the Model TT. The Ford Model TT is regularly maintained and used for displays and in parades. 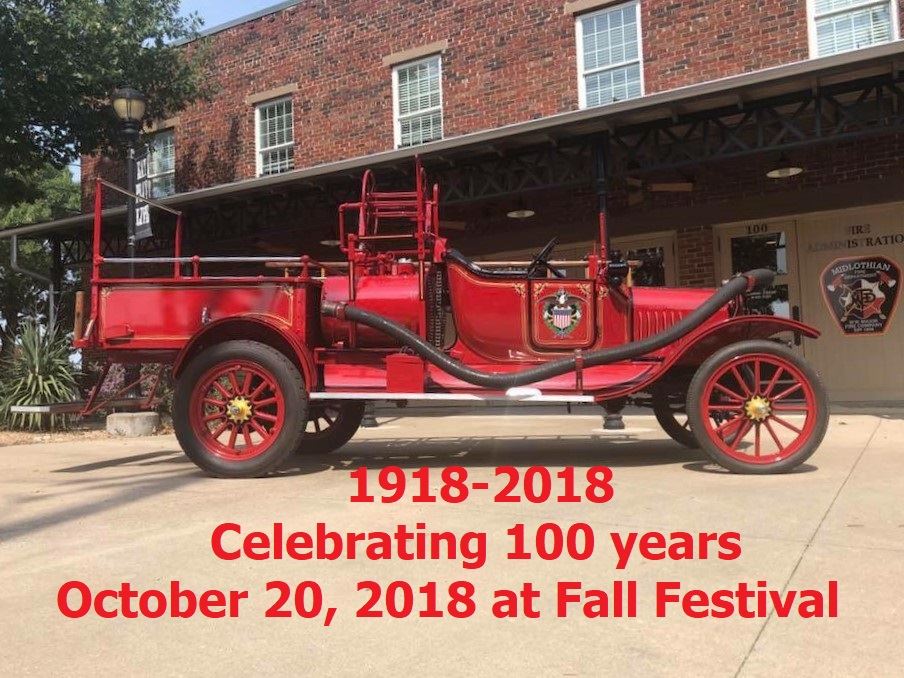 This 1918 Ford Model TT Howe fire truck was on scene for the first recorded fires in the City of Midlothian. We are the original owner of this historic fire truck which is believed to be one of only four remaining in the country. Following 50 years of service, the fire truck was retired only making a cameo appearance for the occasional parade. The historic truck fell into a state of rapid deterioration during retirement and spent the last several years in a storage shed in Proffitt Industrial Park. In 2004 the Historic Advisory Board launched a fundraiser to restore the historic truck to its original state as a way to preserve a piece of the City's history.

In 2008, the City Council approved funding of this project with monies coming from the Environmental Mitigation Permit Fee (a fund paid by the gas drilling industry for open-loop systems and kiosk sign leases). Other funds came from citizen and industry donations and a grant was received from the Midlothian Community Development Corporation.