The Rise Of Industry 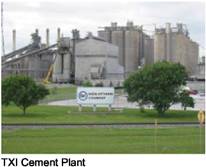 After World War II, Midlothian’s economic base would undergo another transition into an industrial center serving the growing Dallas-Fort Worth market. The community would continue to enjoy its strategic location as the southern transportation crossroads with easy access to the Dallas-Fort Worth area, but lying beneath its productive agricultural soils was the bedrock of its economic expansion.

Midlothian is located close to the highest elevation in Ellis County atop the Austin Escarpment, a thick chalk ridge that runs in a northeast to southwest direction. The Austin Escarpment through Midlothian represents a 600-year potential limestone reserve that has attracted three cement plant operations that can closely serve the expanding Dallas-Fort Worth real estate market.

In 1959, Texas Industries, Inc. (TXI) began construction of its first cement plant in Midlothian. By 1967, the company had a total of three kilns to help meet the demand for cement with the construction of the Dallas/Fort Worth Regional Airport. TXI became the largest cement operation in Texas with the addition of the third kiln. In 1972, TXI added a fourth kiln to its Midlothian cement plant. TXI’s fifth and latest kiln went into operation in the beginning of 2003. TXI (purchased by Martin Marietta in 2015) employs approximately 173 people today. Other major cement operations in Midlothian include Ash Grove Texas, LP with 121 employees and Holcim (Texas), LP with 145 workers.